Back to all posts

Our next local gig for Ibstock Rock n Roll Club, which is upstairs at the West End Club function room Coalville Friday 26th 7pm  £8 on the door, this will be the last gig we play locally for the considerable future as all members have gone on to portray bigger better adventures.

you’ll find him plying his talents with great acts such as Jimmy and the Houndogs https://www.facebook.com/JimmyAndTheHoundDogs/ and also he’s had huge success playing in a Greed Day tribute act called Green Date, they’ve won the national tribute awards Best UK band for 2017 and 2018! Find them here http://www.greendate.co.uk/

Barry has joined Leicester based metal band called Final Coil they are currently recording original music in studios over Italy, you can find them here https://www.finalcoil.com/ and also if he’s the drummer for local Leicester band the Silver Threetles, a must watch band if you’re into the 60s, they have a big show coming up at the Y Theatre in Leicester in December https://www.facebook.com/thesilverthreetles/

Ryan after graduating University with a Mechanical Engineering degree has decided to concentrate on a new job he has secured working for a top international firm, he’s also been busy writing his own original music so please take a look at his page https://www.facebook.com/johnnysmithguitar/

Sharon is currently training to be a radio presenter and hopefully will have her very own radio show on local radio, she also does a regular radio show with fellow Del Sharron Andy H, the radio show is broadcast out in America but you can listen once a week on the internet https://onlineradiobox.com/us/wdyg/?cs=us.wdyg&played=1 Sharon’s show co hosted with Andy is focused on the British invasion over America.

Sharon will also be performing in her new project with Andy H called Lexy Rose and the Lucky Charms performing all your favorite Rock n Roll songs from the 50s https://www.facebook.com/LexyRoseband/

Sharon will also be part of a new exciting project with Matt and a few other members from another band to create a high-quality Rock n Roll band with also some new original music, so look out for updates on that.

Sharon and I would like to thank all those members mentioned, we have had an amazing time performing with all of you, we took the Del Sharrons to some amazing places and we have some beautiful memories we shall never forget. Its been an honor to share the stage with you all and we’ve made some great friendships.

Also we need to mention the Del Sharrons will honor all current bookings and our last gig with Ryan Smith on guitar will be New Years Eve at the Soldier and Sailors Club.

for tickets for the gig on Friday please click on the link https://ibstockrocknrollclub.com/tickets 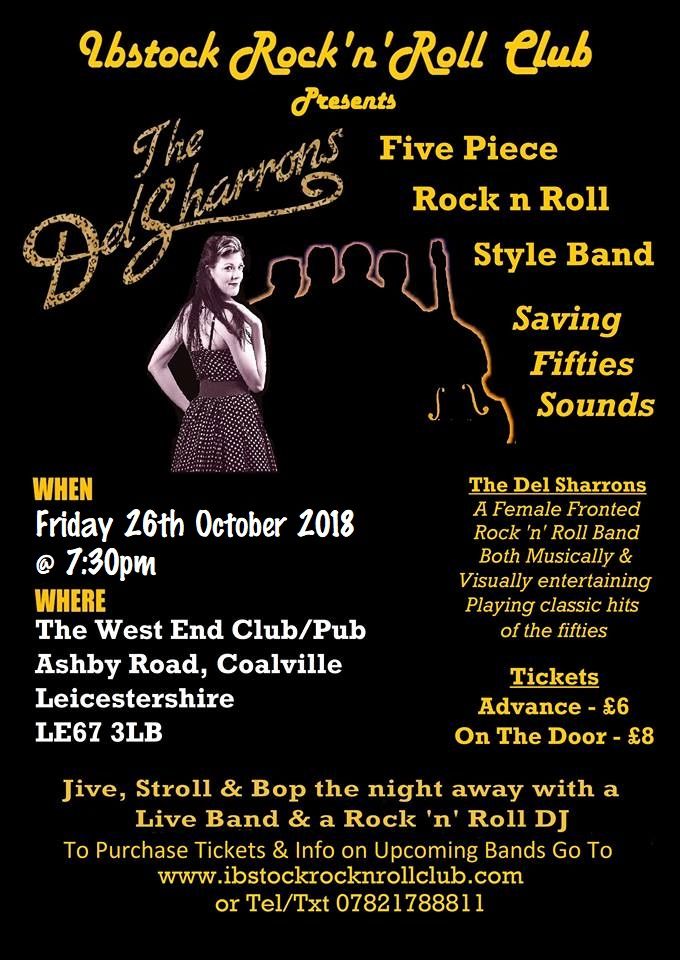